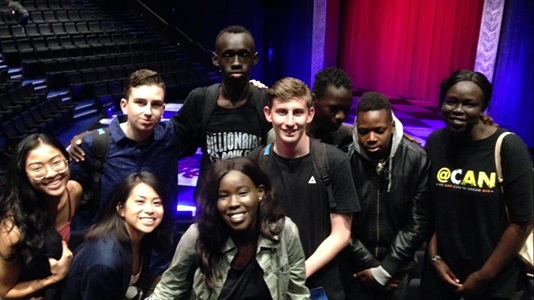 On the 4th of February Drama students in Year 11 and Year 12 had the privilege of attending ONSTAGE at the Seymour Centre, to watch Band 6 HSC performances and to check out Band 6 Major Works to give them some idea of the standard required for their HSC year.

Students viewed a variety of individual performances and design projects in Costume, Reviews, Poster Program and Set Design. It was also an opportunity for students to mingle among other drama students, check out another venue beyond Parramatta, and to see interesting and challenging Group Performance pieces.

This is an annual event which we organise to get the students engaged with learning beyond the classroom as well as continue to work on social skills and life skills.

The students were fine ambassadors of St Andrews College- as always! 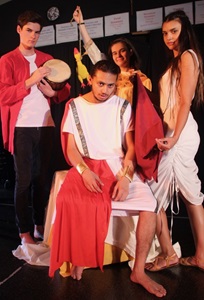 In the weeks leading up the 9th of January a number of SAC students including Year 11 Drama student Nicolas Menohous and Year 12 Drama student Guet MacAcuek as well as a number of students from two other local Catholic Colleges, were all part of the CAPTIVATE Drama Program and gave up their holiday time to rehearse and then participate in this world wide competition. Two plays were workshopped and presented Alexander the Great and The Office of Threats to Western Civilisation and were very well received by all who attended.

The performances received many People’s Choice votes and it was a close call and whilst we didn’t take out the actual award, the performances were well received the Festival Organiser Wayne Tunks  who was very impressed with the students' enthusiasm and more importantly their professionalism!

It was also good to welcome back two ex-drama students Kayla Vanderent and Mario Fouad who thoroughly enjoyed the opportunity to perform again in a professional environment at the The Depot Theatre, Marrickville.

It was a proud moment as they all took their bows, supported each other, and committed their time over their school holidays to produce a professional show.